CJC-1295 is a synthetic growth hormone releasing hormone (GHRH) analogue comprising of 30 amino acids[i]. It has a molecular formula C152H252N44O42. In regards to its significant increase of growth hormone secretion, CJC-1295 has been found to be very effective, as research on animals has shown.

CJC-1295 and Ipamorelin are often combined to enhance GHRH.

What is DPP-IV? DPP-IV is an antigenic enzyme responsible for signal transduction, immune system regulation, and apoptosis. This enzyme has a direct effect on the half-life of GH, reducing it to under 7 minutes.

As per research, CJC-1295 has been shown to minimize the production of DPP-IV, resulting in a feedback loop in which IGF-1 and GH’s half-life is prolonged and will last more than seven days following administration.

There are a number of advantages of CJC-1295 which are being increasingly studied by researchers in the field. Drawing from over a decade of research, the following CJC-1295 benefits have been noted:

As CJC-1295 usage is only currently legal for research experimentation, scientists are discovering an increasing amount of new data regarding this research peptide.

Growth hormone releasing hormone is produced in the hypothalamus, a small region located at the base of the brain. Its release from the hypothalamus stimulates the release of GH from the pituitary gland. However, this hormone has a very short half-life of just a few minutes, making it less effective.

Or what is DAC for starters?

DAC stands for drug affinity complex and is considered by researchers to result in greater peptide bonding.

The main purpose of DAC is that it extends the half-life of CJC 1295 peptide.

According to recent studies[ii], when you combine CJC 1295 with DAC, the half-life extends to nearly 8 days — a huge jump from the regular half-life of 30 minutes.

The shorter the half-life, the lesser the effects. That is why combining CJC 1295 and DAC promotes more effective results than CJC-1295 without DAC.

The above benefits will naturally occur in animals with CJC 1295 with or without DAC. Still, scientists believe that DAC enhances the results of using CJC 1295 on its own. Therefore, it is recommended to use DAC with CJC-1295 for your research.

According to new studies[iii], CJC-1295 peptide has shown to significantly increase growth hormone and IGF-1’s half-life which results in more powerful effects. Let’s take a look at the top CJC-1295 results, as confirmed by scientific researchers.

Studies show that CjC1295 can increase the rate of protein synthesis in animal subjects, which results in dramatic growth in their muscle size and mass over time. This suggests CJC 1295 for muscle growth is an effective treatment, as proven in studies on animals.

Thanks to the increase in protein synthesis, CJC 1295 also plays a role in increasing bone density. As per research, animal subjects have demonstrated a higher mineral matter per square centimeter in their bones following the intake of CJC-1295.

According to studies, CJC 1295 improves sleep. Not just sleep, but the quality of sleep. When testing the measure of quality sleep in animal subjects, research shows that the increased rate of protein synthesis is compensated by increased amount of deep sleep.

Research suggests that CJC 1295 fat loss effects are profound. Due to CJC 1295’s effect on DPP-IV and GHRH, it plays a vital role in lipolysis, otherwise known as the reduction of body fat. It has additionally been found to heighten lipolysis in animal subjects thus reducing their total body fat.

Scientists consider CJC 1295 to be a safe product. Currently, CJC 1295 is only allowed to be used for research purposes. Human usage is prohibited.

Studies show from CJC 1295 peptide research that the peptide could result in GH resistance developing. This is why it is best to provide breaks between administrations so that resistance doesn’t develop in your research.

Side effects of CJC-1295 may include headache, diarrhea, vasodilation, nausea and abdominal pain, as confirmed by researchers who have tested CJC-1295 on animal subjects.

When buying peptides, it is always best to purchase from a recognized company or authorized doctor, in order to receive the best quality CJC 1295 online. Which company is considered the best CJC 1295 supplier 2022?

Peptide Sciences is founded by Dr Logan., M.D. who holds a doctorate degree from Case Western Reserve University School of Medicine as well as a B.S. in Molecular Biology.

Order now to get the highest quality, US manufactured CJC 1295 with DAC.

[ii] “Should you use CJC 1295 with DAC or without?” Rohit Chaudhary RPh: https://riteawaypharmacyrx.com/cjc-1295-with-or-without-dac/ 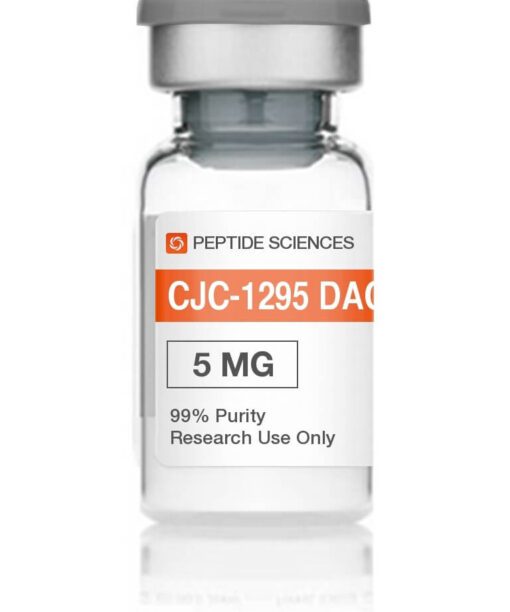